1
Wesley Fists is one of the main characters on Netflix's Daybreak. He is portrayed by Austin Crute.

He is football star with budding movie star looks and a penchant for swords, he was part of a system that ostracized and terrorized the students beneath him on the social totem pole — like Josh Wheeler. But when Josh and Wesley meet once again in the apocalypse, Wesley is trying to follow the path of Eastern enlightenment and non-violence.

A highly complex individual who struggles with the internal turmoil of a tumultuous relationship and the inability to properly self-reflect and self-actualize creating a plethora of insecurities and tension of coming to terms with his love for Turbo and the stability of his friendship with Sam and Angelica. Wesley seeks out Eastern Enlightenment to atone and repent for the ways he treated the peers at his school, which points to a samurai-based philosophy for a portion of his actions and the avoidance of violence as to prevent his insecurities from flooding back into his conscience. He combines various philosophies into his actions which is subtle to outspoken throughout the story of Daybreak. Ranging from Pacifism, Zen Buddhism, and the most heavily expressed: the Noble eight fold. The incorporation of these philosophies point to a highly damaged being who disguises his emotional pain through repentance and is defined by the ability to almost always find light in the dark.

The struggles of finding his identity is exacerbated by the struggle of acknowledging who is he is an as an individual. The complexity of his character is shown to range from a saddened hero, whose love became a catalyst towards betrayal and deceit to a anxious beast refusing to come to terms with his selfishness and pain to a hurting hero; albeit not finding the solace he needed, but chose to acknowledge his feelings and embrace his pain. A being whose existence was defined by the deconstruction of his identity; in the end, although still struggling. Wesley was able to find a sense of solace in who he is.

Wesley is shown to be very comedic and jovial to be around. Joking, laughing and playing is an essential part of his character and allows to unwind and destress. Affable and dedicated with the combination of intelligence and kindness allows Wesley to easily create friendships in the post apocalyptic world.

His relationship with Turbo is among the most complex in the series. His feelings always put him at conflict with Angelica and Sam, and affect his method of thinking. He's shown to be openly homosexual and enjoys the love he and Turbo share, but is conflicted when finally reunited with him. He confides in his love for Turbo despite the past brutality that those around him has experienced. An extremely unstable relationship with Turbo allowed his encounters to become more and more profound when continuously dealing with the turbulence of his feelings. Although the relationship becomes strained once again and reaches a breaking point when Turbo tries to force Wesley to kill Josh, manipulating him into betraying Josh and culminating with Wesley choosing friendship over love.

Prior to the apocalypse, Wesley had a budding relationship with Turbo Pokaski. The two were on the same football team together and formed a close friendship, eventually leading to a romantic relationship between the two — a relationship that he was keen to keep secret post-apocalypse.

Wesley was a member of the football team and therefore, part of a micro-society that ostracized those it saw as lower than them on the social ladder, this led to predominant attacks against Eli Cardashyan and Josh Wheeler.

Following the apocalypse, Wesley changed his ways, seeking Eastern enlightenment, and becoming particularly interested in the ways of the samurai. He eventually crosses paths with Josh, who is at first weary of him, but the two eventually learn to get along with one another. They form a close friendship, eventually befriending Angelica Green into their circle. They work together to evade both Turbo and Baron Triumph.

The trio eventually befriend Eli Cardashyan, and move into Glendale Place, the local mall. They are initially at odds with each other, due to a lack of trust between the trio and Eli, however these are shortly rectify these and become friends.

When Wesley and Angelica fear Josh will leave the Mall, they devise a plan to keep him there: fake Sam Dean's death. The plan is successful, and Josh decides to stay in the Mall, however things do not stay this way. Eventually, Josh is alerted to the fact that Sam is still alive, under the tyrannical rule of Turbo. Meanwhile, Turbo had given Wesley an ultimatum, to either kill Josh or he will kill them all. Wesley formulates a plan with Eli to kill Josh, however he eventually decides against it.

When Josh finds out about the plan, and the fact that Sam is still alive, he expels the trio from the Mall. Wesley returns to Turbo following this.

The relationship between the two became more serious after Turbo was injured by Michael Burr, posing as Baron Triumph. 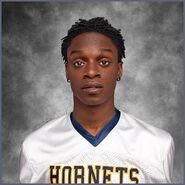 Retrieved from "https://daybreak-netflix.fandom.com/wiki/Wesley_Fists?oldid=1752"
Community content is available under CC-BY-SA unless otherwise noted.