Turbo Pokaski is the (former) central antagonist turned anti-hero of season 1 on Netflix's Daybreak. He is portrayed by Cody Kearsley.

He is a fierce, handsome football player with a terrifyingly stoic manner, he has assembled all the athletic teen teams of Glendale into one, big, murderous crew, and he’s the team captain. When Josh and his tiny gang outsmart his peeps, decimating their ranks, Turbo is determined to track his adversaries down and do his worst.

Prior to the apocalypse, Turbo was the quarterback of Glendale High School's football team. He enjoyed collecting action figures and toys, with his father bringing him one each time he left for an extended period of time.

The bomb that went off also burned the right half of his face off and seemingly removed his ability to speak.

Following the apocalypse, Turbo enjoyed complete, tyrannical control over the tribes of Glendale. He ruled by holding fear over those he believed himself to be superior to, with Mona Lisa as his second. This rule gained him many enemies, including the Geeks, the Daybreakers and Wesley, his ex-boyfriend.

Eventually his rule was feared by even those closest to him, including Mona Lisa. Those closest to him eventually grew tired of his rule and planned to overthrow him. This was successful, and Turbo is replaced as leader of the tribes by Michael Burr, who returns Glendale High School back to its former glory.

Turbo's relationship with Wesley post-apocalypse was complex, often relying on meetings in secret. Things became even more complex when Turbo tried to force Wesley to kill Josh, or face the death of all his friends. Whilst Wesley attempted this, he eventually changed his mind, causing Josh to expel him from the Mall. This caused their relationship to flourish, as they no longer needed to meet in secret, however this alienated Wesley from those he had grown close to previously.

A well-intentioned extremeist; Turbo views himself as the parental figure of the variety of children he subjugates compiling them into a series of cages and exacerbating is self-deprecating mindset and worsening his self-loathing beliefs. Obsessed with the preservation of every group and only actively seeks out defectors and others to contain and protect them as well as unite them under a single banner of unity. Underneath the layer of contradicting actions, violently opposing facades, brutally conflicting connections, and emotionally draining relationships - lies a kind-hearted, well-meaning, devoted, compassionate, considerate, and altruistic individual whose behavior and actions are widely misunderstood and grunts are often misinterpretated as calls for violence. He struggles with the expectations of his father and is seen in his shadow a multitude of times - revealing a deeply insecure character whose afraid of growing into a person inferior to his father. Dedicated to winning and has sporadic moments of violence when losing - acknowledges a perfectionistic and mentally unstable individual whose seeks to promote an image of invincibility while remaining a victim of a superiority complex and inferiority complex and is seen engaging in reminiscing of his past accomplishments that he then compares to his post-apocalyptic self.

Turbo: “I love you” (To Wesley during their fake-out duel)

Turbo: “I’m not dumb” (To Wesley before the game (before the blast) after Wesley said “I love it when you talk smart”)

Turbo has killed 18 people, as was said by Mona Lisa in the first episode. 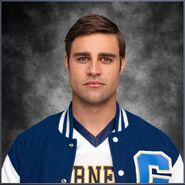 Retrieved from "https://daybreak-netflix.fandom.com/wiki/Turbo_Pokaski?oldid=1828"
Community content is available under CC-BY-SA unless otherwise noted.