1
Samaira “Sam” Dean is one of the main characters on Netflix's Daybreak. She is portrayed by Sophie Simnett. She is a soulful, radiant girl who is outgoing and well-liked by everyone she meets -- particularly Josh, who is smitten with her at first sight. Their budding romance is literally nuked when atomic bombs decimate civilization.

She later commands the respect of the tribes when she takes over control of the tribes from Michael Burr, much to Josh's surprise — who she tells she does not wish to get back together with.

After a video of Sam, (filmed and posted by Josh Wheeler) goes viral, Sam becomes an overnight sensation — an influencer. It is revealed in a flashback that she generated over one million followers thanks to the video. In the mentioned video, Sam approaches mallgoers and says random compliments meant to elicit a positive reaction.

Not only does the video make Sam an online icon, but it also makes her one at school, giving her the title of "Prom Queen" and solidifies her place as the most popular girl in school. Sam truly holds clout over her classmates with some often saying, "Everybody loves Sam".

At the beginning of season one, we have painted an image of Sam which is altered by Josh's rose-colored-glasses perception of her. At first, we only see the "good" that Josh sees in Sam due to his infatuation with her. Josh Wheeler, our sub-par hero, romanticizes their relationship and puts Sam on a pedestal. This blindly leads him to assume that Sam is the girl-next-door meet damsel-in-distress love-of-his-life. This, along with Josh's hopes, is crushed in Post Mates when he finds out he isn't her first sexual encounter.

Sam Dean is shown having skin-deep relationships with those she encounters. Even in her brief relationship with Josh, she tells him that he, "doesn't know esdfsdfsdfsdfsdf about her to love her". Meaning that even in her most intimate relationship, she doesn't reveal herself emotionally. In a scene before her and Wesley's pre-homecoming game, she tells him to, "Choose Wesley" when he is faced with a decision between the love of his life and his family. This implies that she chooses herself first in any given situation.

Josh's initial six months following the explosion focus on finding Sam, as he does anything he can to reunite with her. He eventually does reunite with her, but the spark between the two of them seems to be gone. The relationship between the two is strained more when she finds out that he slept with KJ, calling him a hypocrite for chastising her for her numerous sexual partners.

Sam eventually helps towards the effort to take down Michael Burr, eventually succeeding. Josh assumes that the two will get back together, however she brushes him off, instead, she takes Burr's throne, taking control of the tribes. However, the Daybreakers didn't seem to agree and season 1 ended with this cliff hanger.

A strong female character with a lot of charisma. Sam is liked by everyone and holds a prominent status in school; she reprimands bullies and often seen scolding Hoyles for being a deplorable human being. Despite the friendly demeanor Sam puts up, it is subtlety revealed through dialogue and past flashbacks that she is an emotionally guarded individual. Her surface friendliness makes people feel like they know her more than they do and that in turn makes her trust people even less. Because she feels that no one knows her, she prevents the establishment of evolving relationships. She is confident in her sexuality and working on finding out how to be confident showing her true self as well instead of trying to be likable to everyone. She is not a damsel in distress and loathes the idea of even being considered one. She doesn't need rescuing. Josh puts her on a pedestal and because of his own emotional troubles and personal traumas he feels threatened by her and attacks her. Even when he realizes some of his errors he still falls into the trap of believing in idealistic love instead of real love.

In the final episode, she joyfully takes the throne with no resistance and people are left to question once again, who Sam really is. She reveals her own duality and proves to be a layered character that we don't fully know what to expect from.

Sam Dean: "Your superpower is your honesty. Radical honesty."

Sam Dean: "Nice is what you say when you have nothing else to say about someone." 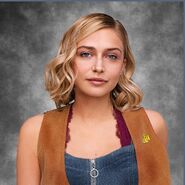 Retrieved from "https://daybreak-netflix.fandom.com/wiki/Sam_Dean?oldid=1826"
Community content is available under CC-BY-SA unless otherwise noted.