Ms. Crumble is one of the main characters on Netflix's Daybreak. She is portrayed by Krysta Rodriguez.

Once the high school biology teacher, Ms. Crumble is one of the only adults known to have survived the bomb without turning into a ghoulie — to some extent. Something is very wrong with her brain, however, and she’s a subject of great fascination for Angelica. As her story unfolds, it is revealed that she is more human that ghoulie, retaining her compassion and caring for the students even after the fact.

As a pre-apocalypse teacher, Ms.Crumble always aspired to become a great teacher, similar to those in movies. When starting her job at Glendale High School as a biology teacher, she realized she would never be a perfect teacher, causing her to have a breakdown. This resulted in her nickname, Ms. Crumble. The students changed the name in the computer system, resulting in Ms. Crumble having to legally change her name to get her paycheck.

Later on, Principal Burr needed higher results in order to apply for school funds. He asked Ms. Crumble to manipulate the grades of her students, however she refused and Principal Burr pushed her down the stairs in the basement, causing massive brain-damage.

Following the apocalypse, Ms. Crumble has major brain damage due to Burr's actions. She is trapped in the Mall with Eli Cardashyan, who does not quite understand that she has some mental faculty left following the explosion. When Angelica, Wesley and Josh are allowed to enter the Mall, she forms a close, but unlikely relationship with Angelica. Angelica becomes fascinated that she has somehow retained some parts of her mental faculties, whilst she has transformed halfway into a ghoulie, however.

She begins to help Angelica, Wesley, Josh and Eli to secure the Mall, whilst also attempting to figure out what happened to her prior to the apocalypse. She eventually figures out that she was pushed down the stairs by Principal Burr after refusing to manipulate student grades to ascertain funding for the school.

Angelica and Ms. Crumble become attached during later episodes and it seems quite difficult to separate the two. When Angelica is expelled from the Mall and joins the Cheermazons, Ms. Crumble leaves the mall immediately to find her. When she finds her, she begs her to return, however Angelica tells her that she cannot, due to her explosion, and the two join the Cheermazons.

Following this, Ms. Crumble is present when Michael Burr plots to set off a second nuke to wipe out some of the population. After Angelica is forced to finish the rocket, it becomes apparent that the nuke can be exploded in mid-air, meaning that it will not adversely affect anyone, however it can only be done manually. Much to Angelica's dismay, Ms. Crumble volunteers to be the one to push the trigger, believing it her duty to protect her students. Angelica is heartbroken when the rocket explodes, however is relieved to find out that Ms. Crumble survived the explosion.

Ms. Crumble has serious brain-damage and doesn't know how to properly interact with people. Every now and then she remembers something and screams the words, making her seem paranoid. At first, she struggles to resist the urge to consume the kids like regular ghoulies. With the help of Angelica Green, she is able to manage this urge and tries to do everything she can to protect the children. 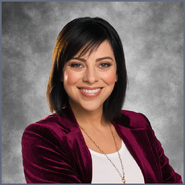 Retrieved from "https://daybreak-netflix.fandom.com/wiki/Ms._Crumble?oldid=1659"
Community content is available under CC-BY-SA unless otherwise noted.