Mary, most commonly known as Mona Lisa, is the secondary antagonist in the first season on Netflix's Daybreak. She is portrayed by Jeanté Godlock.

This tough female athlete got her nickname because she never smiles. She’s a member of Turbo’s brutal team of jocks and his closest consigliere.

Following the apocalypse, Mary becomes Turbo's fierce second-in-command. She begins her totalitarian rule alongside Turbo, eventually becoming feared among the tribes, and those residing in the Mall.

Eventually, Mary becomes sick of Turbo's rule and devises a plan, alongside Sam Dean, to end his tyrannical leadership. They are successful in overthrowing Turbo, but are not left in a better situation when Michael Burr takes over. This eventually leads her to riot alongside the rest of the tribes, overthrowing Burr, who is eventually killed by Josh Wheeler.

With Burr and Turbo out of power, Sam Dean takes the reign and the crown. Mary becomes her second-in-command, resuming the role she had played previously. 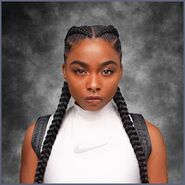 Retrieved from "https://daybreak-netflix.fandom.com/wiki/Mona_Lisa?oldid=1643"
Community content is available under CC-BY-SA unless otherwise noted.