Leader of the Daybreakers (Currently)

1
Josh Wheeler is a main character on Daybreak. He is the leader of the Daybreakers and the ex-boyfriend of Sam Dean. He spends the majority of the first six-months after the explosion searching for Sam. During his time searching, he grows closer with Angelica Green, Wesley Fists and Eli Cardashyan. The four make the Glendale Mall their base of operation and eventually form the Daybreaker's from there.

Josh is an ordinary kid, however he learns that he is not so ordinary following the explosion. From his own mouth, the apocalypse is the best thing that ever happened to him; allowing him to finally be the hero he has always read about in the comic books. Josh's search for Sam leads him to be a reluctant leader to a tribe of outliers and misfits. During this, he becomes a key enemy of both Turbo Pokaski and Baron Triumph. However he eventually befriends the former and kills the latter.

Described as a C-student with average intelligence and cowardly behavior. However there is more to Josh than surface-level assumptions. Josh himself is a highly-intelligent and idealistic individual who hides behind a layer of comedic goofiness to hide the emotional suffering from the death of his father and from the supposed death of his love-interest Sam Dean. Josh is repeatedly shown to be highly selfish, inconsiderate, and broken; Struggling with the inner turmoil of parenting himself due to lack of parental guidance and emotional support. Seeking to oust the pain by materializing the behavior of emotional misery as total attachment to feminine characters showing that because of his mother's lack of involvement his relationship and obsession with Sam Dean he deeply desires to feel loved and often masks his need for others by deflecting with apathy or general hatred; holding a deep self-loathing for abandoning his father to live with his mother - he regrets his past mistakes with absolute conviction and refuses to let down his emotional guards out of fear of being hurt and to prevent the augmentation of his already compounding regret and emotional pain.

Josh Wheeler hides behind the facade of a lone-wolf - pretending to despise the relationship with others and avoidance of kindness and geniality as to opt out of meaning connection with others; One of his most complex issues is understanding that observations of one's abilities and flow is imperative while establishing the concept of his own identity while acknowledging the fact that people themselves are making one too.

Josh Wheeler is highly complex character. Throughout the story - Josh's characters goes from being an Individualist with his character philosophy being based in seeing the value in the pursuit of self-actualization through independent self-reflection and finding personal acceptance and support and establishing one's identity through introspection and internal motivations to a collectivist - and individual who seeks the company of their fellow man/woman through the acquisition of allies and puts emphasis on self-discovery through togetherness and bonds. Sam although still struggling; Has found a potential balance between the two.

Prior to the apocalypse, Josh was an ordinary, C student. He had just moved to LA from Canada with his mother following his parents divorce, but had very little friends. Josh spent the majority of his time with his girlfriend, Sam Dean. The relationship between the two was idolised by many at the school as Sam was viewed as highly attractive. This led Josh to be tormented frequently by the jocks at the school.

Josh was dating Sam prior to the apocalypse and the two had been in quite a serious relationship. The two hanged out frequently, including at the Glendale Mall, where he helped Sam create the video that made her popular at the high school.

Things begin to get serious with Sam when the two decide to take their relationship to the next level. In Post Mates, the two decide to have sex, which is new and scary for Josh, who fears it. Sam tries to calm him by showing him a consent app, which shocks Josh, who didn't know that there were so many options that the two could partake in. Nevertheless, the two eventually take things to the bedroom, where Josh has trouble performing the act, much to Sam's dismay, who tries to assist him as best as she can, but the two eventually call it quits and head to the pool.

In the pool, Sam gives her opinion on patriarchal oppression and views on women, including the names women get called if they have had numerous sexual partners — a discussion Sam and Josh had discussed extensively before. Josh finds Sam very attractive during this time and they take things back to the bedroom, where they are able to have sex more naturally and enjoyably.

During their time in the bedroom, Josh's phone rings again. Josh tells Sam to ignore it like they have been all day, however she answers the phone. She hands the phone to Josh and he talks with his mother, who reveals that his father has passed away. This upsets Josh but also makes him angry and he storms off from the apartment. He directs his rage at Sam, blaming the fact that they were having sex that he didn't pick up the phone. Sam doesn't find this fair, but Josh doesn't care and tells her to go and have sex with someone else; essentially revealing that he knows who she has had sex with previously. His anger culminates in him calling her a derogatory word, which prompts her to leave as she cycles away on her bike.

Josh attempts to apologize later, taking her flowers to the football game. He is, unfortunately, unable to apologize as the explosion occurs before he is able to reach Sam.

The first six months of Josh's life following the apocalypse is focused on finding Sam, and he rides around the city on his skateboard searching for her whilst also trying to avoid Turbo Pokaski and the tribes under his command. His search eventually leads him to bumping into Wesley Fists and Angelica Green, who he saves from the golf team. The trio head to Glendale Mall when they fear they are being chased by Baron Triumph, however it turns out that they are actually being tricked by Eli Cardashyan, who poses as Baron. Eli invites them into the Mall, but does not trust them at first. He eventually warms up to them when they begin to associate themselves with Ms. Crumble, their former teacher who has half-turned into a ghoulie.

Josh is thankful to Eli for his hospitality, however wishes to venture back into Glendale to find Sam. Fearing this, and wanting him to stay in the Mall, Angelica and Wesley fake Sam's death using a mannequin dressed like her. This breaks his heart, however prompts him to remain in the Mall indefinitely, much to everyone's relief.

Josh vows to avenge the death he has been tricked into believing and leaves the Mall to exact his revenge on Baron Triumph. He is captured, however and his plan goes sideways. He is eventually able to free himself when international students also trapped by Baron aid him. He is able to overcome Baron, whose identity is revealed to be Michael Burr, and lock him up in the cereal factory. Josh, Angelica, Wesley and Eli welcome the students trapped in the cereal factory back to the Mall, where he eventually forms his own tribe, the Daybreakers.

After he finally figures out that Sam is in fact alive, given Wesley and Angelica lied to him, and for Eli's attempt to kill him, he ejects the trio from the Mall. Leaving the trio to fend for themselves, he sets his sight on saving Sam, who is trapped at Glendale High School under Turbo Pokaski’s control.

Rescuing Sam from Turbo's control at first proves a difficult feat. However, it is made somewhat easier when Michael Burr takes control of the High School from Turbo and returns the school to its former glory. This makes it easier for Josh to rescue Sam from under Burr's nose. His plan is not successful, however as Burr explodes another nuke just as he finally meets with Sam again. When the explosion has passed, the two are glad to see one another, however Sam has not forgotten what he said to her and all is not forgiven. Nevertheless, the two work together on a plan to take on Burr.

Things go downhill between the two when Sam realises that Josh hooked up with KJ behind her back. She takes extra offence given the derogatory names that he called her due to her previous sexual activity; namely she views him as a hypocrite. Josh and Sam get over this, however when Josh shows her the post-it note she wrote for him asking where he is. They formulate a plan and are successfully able to take down Burr once and for all, leaving the tribes leaderless and in chaos. Josh attempts to regain the connection with Sam, however she reveals that she doesn't want to get back together with him and, instead she takes Burr's throne, assuming control over the tribes and shocking Josh.

Josh Wheeler: "It was sponsored by the communist party of Canada."

Josh Wheeler: "You're a slut, Samirah."

Josh Wheeler: "A Yamashiro katana, Honshu Province. Television taught me every good sword has a name. I mean, Excalibur, Vorpal, Longclaw, Sting... Needle! I shall name mine... Sam."

Josh Wheeler: "And little dictators with big egos? Well, they can launch a nuke with a tweet."

Josh Wheeler: "This is love, and love is more important than boobs."

Josh Wheeler: "Be the flow." 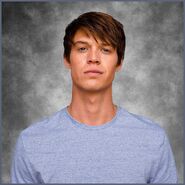 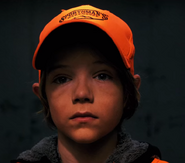 Retrieved from "https://daybreak-netflix.fandom.com/wiki/Josh_Wheeler?oldid=1819"
Community content is available under CC-BY-SA unless otherwise noted.