Eli, Eazy-E (Given to self)

1
Eli Cardashyan was one of the main characters on Netflix's Daybreak. He is portrayed by Gregory Kasyan.

In high school, Eli was one of the have-notch. In the apocalypse, Eli barricaded himself inside the Mall, therefore had everything he could possibly want – every brand-name sneaker, every iPhone, and gifts galore for his girlfriend.

A megalomaniac who compensates his shortcomings and lack of personal achievements with various knockoffs as a means of appearing up-to-date with various social trends. His obsession with being seen as superior stems from being born into abject poverty; growing up with nothing creating mindset within Eli to not only become someone, but become someone who was better than everybody else around him. His past encounters with others act as a catalyst for his already unstable mindset; comparing himself to Sultans of countries to Final bosses of level only compound is already deplorable traits that reveal a saddening individual whose sought to define his identity by appealing to popularity or social status. Eli holds a deep fear of appearing inferior and beneath anybody heightening is insecurities he defends by viewing himself as superior - hence the obsession with materialistic properties. The mall acts as a metaphor for Eli's ego overall character. Highly guarded and important to him while preventing anybody from digging deeper into his character. Each door his heavily fortified revealing his emotional defenses are nigh-impenetrable and has violent tendency to rebel against anybody invading his 'Kingdom'.

Prior to the apocalypse, Eli was a nobody. He was made fun of in school, walked around in off-brand clothing, and was viewed as annoying. He was a big Magic The Gathering card collector, though. He kept the cards in his school locker as this was where he felt they were most protected and safe.

Eli's position changes dramatically during the short period following the explosion. He eventually takes over Glendale Place, the local Mall, and refuses to allow anyone entry. He barricades himself in with rigged-traps and strong forces against the door, essentially creating the safest place in Glendale — except perhaps the High School and/or Turbo's lair.

Eli eventually allows Josh Wheeler, Angelica Green, and Wesley Fists into the Mall, despite initial reluctance. The trio does not trust him, however, and section him away from them. They eventually come around and begin trusting him, and he allows Ms. Crumble to join them in the Mall. They are later joined by many other students who have survived the apocalypse.

When Wesley reveals that Turbo Pokaski gave him an ultimatum, either kill Josh or risk everyone's death, Wesley asks Eli for help. The two conceive a plan to poison the prom crown and ensure it lands on Josh's head, however, Wesley eventually gets cold feet and aborts the plan. When Josh finds out, he ejects the pair — and Angelica for her involvement with Sam's fake death — from the Mall. Despite this, Eli tries numerous times to re-enter the Mall, however, Josh continues to throw him out and Eli believes his empire has been stolen from him.

Josh eventually allows Eli to rejoin the Mall, and the two formulate a plan to save Sam Dean from Michael Burr's control. The two plan to infiltrate the High School, with Josh as Eli's prisoner, whilst Eli dresses as Baron Triumph. Their plan is almost successful, however, the two are attacked by Jaden Hoyles, who is under the impression that Eli is actually Triumph. Eli is fatally wounded and begins to bleed out despite Josh's attempts to help him. He later dies in Josh's eyes, revealing that Mavis is actually imaginary. Josh is upset over his death and begins to cry before leaving to save Sam. 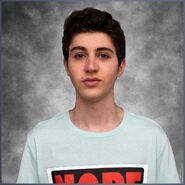 Retrieved from "https://daybreak-netflix.fandom.com/wiki/Eli_Cardashyan?oldid=1711"
Community content is available under CC-BY-SA unless otherwise noted.