This article is a stub. You can help Daybreak Wiki by expanding it.

1
Angelica Green is one of the main characters on Netflix's Daybreak. She is portrayed by Alyvia Alyn Lind.

She is a precocious, abrasive pyromaniac, Angelica is a pain in the ass who Josh accidentally saves from a bloodthirsty gang when he mistakes her screams for Sam’s. She begs Josh and Wesley to let her team up with them, and her flair for making Molotov cocktails starts to come in very handy.

Before the apocalypse, Angelica sold drugs mixed into edible slime and made a business out of it, selling it to teenagers at a school she didn't go to, calling herself the Slime Queenpin Of Glendale CA. (specifically Glendale)

She is shown as a pyromaniac and it is implied that Josh Wheeler babysat her several times and she attempted (and sometimes succeeded) to either burn him or his stuff. 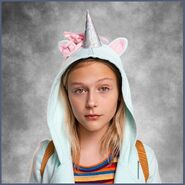 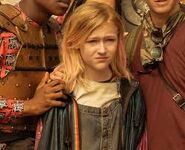 Retrieved from "https://daybreak-netflix.fandom.com/wiki/Angelica_Green?oldid=1753"
Community content is available under CC-BY-SA unless otherwise noted.